Two weeks seems more like a month ago, but what we’ve done and learned about Buenos Aires already seems as if we have been here more than 14 days.

As far as cultural aspects, I’ve loved them all. The lifestyle is a, “take life as it comes,” type of attitude. You can go into a coffeeshop or restaurant and sit for an hour or more after you’ve finished, and simply chat with friends. There’s no waiter bringing the check and pushing you out the door. You may have to work hard to get the waiter’s attention and ask for the check, or la cuenta, if you want to leave, but you’re more than welcome to relax and enjoy the atmosphere.

After arriving home from the boliche (club) at 6 a.m. (Yes, the sun was rising)

Now that’s not to say the entire city is laid back. Buenos Aires is a bustling, international and multicultural city, (where the bus driver is more than happy to leave you in the dust if you don’t board fast enough). A culture more invested in an individual’s well-being, instead of spending more time worried about how to get ahead of others, as I feel happens to many in the United States. 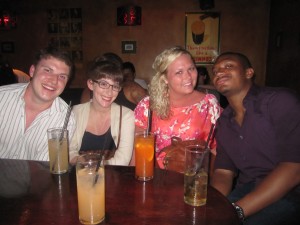 Drinks at the Irish Pub

It’s these differences in cultures that makes traveling the world so enjoyable. I think it’s easy to get caught up in an “us and them” mentality. I know this has happened to me before, especially before I traveled outside of the country for the first time almost 10 years ago. It can be too easy to think there’s nothing else in the world outside of the U.S.

If you go to a bar, don’t be surprised if you lose track of your friends. It doesn’t take long to get caught up in conversation with other people and spend hours enjoying yourself with someone you never met before. The bars, or boliches, are a socialites paradise. When you develop a friendship using no English, it’s quite fulfilling.

The hardest things to get used to are those that I tend to take for granted in the U.S. We don’t have a clothes dryer or dishwasher, and using a phone that was the U.S. standard 10 years ago has required some getting used to. A text that would take 30 seconds on the iPhone, instead takes about 2 minutes to write. Thus, I’ve had to take a crash course in how to use text language again. The lack of vowels and punctuation can only make an aspiring journalists cringe.

We visited the area, known as Tigre, this past weekend. Tigre is a delta, about an hour northwest of Buenos Aires. A train ticket only costs AR $2.70 and for another $60 pesos, you can take a boat ride to one of the beaches in the delta. 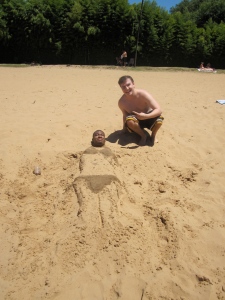 My attempt to make Rob look like a bikini model

I can say I never thought I’d get a sunburn in January, but after spending an entire day on the beach, my back looks more like a cooked salmon. 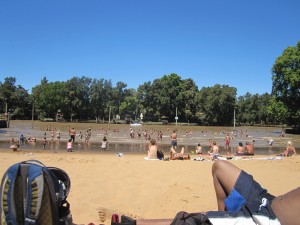 As for this post, I’ll leave you with a few more pictures below and a clip from Animanía, my new favorite television program. Think of wildlife videos with human voices dubbed over the clips.

Along the delta in Tigre

No blog post is complete without some graffiti - San Telmo