Yes, the honeymoon is indeed over. Those glorious two and a half weeks of going out on weekdays, leisurely strolling through the city and getting lost on the occasional bus trip seem long gone now. 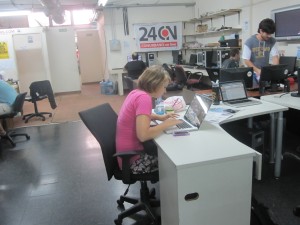 School and our internships are kicking into full gear and our free time dwindles each day. No longer can I sleep in and not have to be in class until 2:30. (or 14:30. I’m still getting used to this military time.)

I can tell the honeymoon period is ending because that culture shock they always tell you about in orientation sessions, is just beginning. Slowly but surely I’m moving away from the “honeymoon” period and into the “hostility” feeling. Of course, there’s nothing to worry about, it’s just 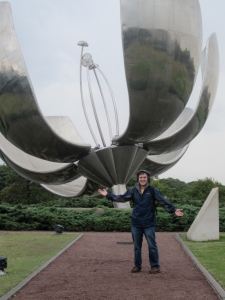 what happens when you live in another country long enough to get your mind away from a vacation mentality. Enough of this culture shock talk though because there has been plenty of great news to share.

As I mentioned earlier, internships started this past week. One of my internships will be with the media group infonews.com. Our program director, Carolina, described it as a young and upcoming news group, or more appropriately, a conglomerate. InfoNews also consists of multiple media outlets, such as Miradas al Sur and 24CON to name a few.

As is the case with many of the buildings here in Buenos Aires, I’m thoroughly convinced our newsroom is part of an old warehouse. The air conditioners occasionally drip water on you making it hazardous for my laptop. Part of the newsroom has carpet, but it’s not secured and covered in water stains. (I learned this after my chair became frustratingly entangled in the carpet.) The rattail is also a common

The newsroom in the summer - Our editors don't come in until Wednesday and even then, they are there for 1/2 the day.

site around the newsroom. Oh, and did I mention, EVERYTHING runs on Microsoft? Being a spoiled Mizzou J-schooler, I had to keep telling myself, “You can do this, PCs really are user friendly. No really, they are. Well, maybe…” With rattails, Microsoft and Adobe CS2 software, it really is like being in a time warp that takes you back to the 90s.

Each day I learn something new about the newsroom. When someone arrives to the newsroom or leaves for the day, they make sure to go around to each team member and give them the customary kiss on the cheek.

Attribution and fact checking seems to be more of an option, instead of a mandatory practice. I already lost count the first day of how many times I saw staffers simply go to Google images and copy and paste a photo onto the website with no attribution.

Lunch from the Mexican food place we found after our first day at work.

Having said all this, I want to be clear I’m not putting down or judging the newsroom practices. I just want to point out a few of the main details I’ve noticed. Going to the newsroom each day, I tell myself, “It isn’t the Missourian, embrace it and take it all in.”

This is the first time InfoNews has had interns (internships in Spanish are called pasantillas). Now combine that with foreign interns. What’s going to make this internship great is how the two of us will both be learning at the same time. The internship gives us an opportunity to teach them just as much as they’re teaching us. Cultural exchange at its finest.

The other internship I will have is with El Sol de San Telmo. We had our first meeting today with editor and founder, Catherine Marie Black. Black is from Hawaii, so what a relief it was to listen to an editor in English again. Black moved to Buenos Aires with her boyfriend, (who might be her husband now, I can’t remember) in the early 2000s and a couple years later, created the community newspaper known as El Sol de San Telmo. 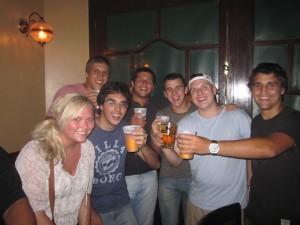 Converted these Porteños into Mizzou fans. Well at least for the KU game.

San Telmo is an up and coming neighborhood that has really taken off after the economic crisis in Argentina in 2001. After 2001, tourism soared in Buenos Aires and as a result, the tourism development and growth has been sporadic and at times “cheesy,” Black said. San Telmo is one of these spots. She created the paper with the intention to help share some of the history of San Telmo and preserve its authentic feel.

San Telmo isn’t the wealthiest neighborhood in Buenos Aires. In fact, it’s far from it. Before the tourism boom, Porteños didn’t think of setting foot in the barrio. It was dirty, poor and just not the part of town you wanted to visit. Over the past decade, with San Telmo’s

I kept thinking how fun it would be to drive this car around. Well maybe not around Buenos Aires.

growth and the people moving to the neighborhood from all parts of the social and economic spectrum, San Telmo has become a young and hip neighborhood that Europeans and Americans adore.

Now it’s up to the Porteños to provide some direction in growth and tourism for the barrio. Growth and direction that much of Buenos Aires, has been lacking as a whole. A historical district has been created, but what exactly that entails and it’s level of enforcement are still up for debate. I’m sure natives of Salt Lake City can relate to creating a historical district and its obstacles. (i.e. Yalecrest neighborhood)

Last week as we were coming back from class, we found ourselves stuck on the bus in a large traffic jam. To fully explain, let me rewind a bit.

Before I left for class, I took out my rain jacket from my backpack (I had packed it because the forecast said it was supposed to rain). But it was so hot earlier in the day, I couldn’t help but think this hot weather would continue.

As class began, clouds quickly moved in and it started to rain. And boy did it rain. I couldn’t help but think as I sat there in class how much I wanted my rain jacket. With class not being over for another hour, I was thinking it would let up. However, like many other things that day, I was WRONG.

So after class, we ran two blocks to the bus stop and boarded the bus soaking wet. I felt like we had made it and were coming down the home stretch. Again, I was wrong. When we finally got to our bus stop, we got off to find ourselves walking in what I could only describe as a shallow lake. The streets we’re flooding and causing cars to find higher ground, i.e. the sidewalk. Apparently, Buenos Aires doesn’t have the greatest drainage system.

What did I do next? Just what Mom would have done. Whip out the camera. Note: Please excuse my obnoxious screams. Here’s another video of just how bad the floods can get here in Buenos Aires (I did not film this one).

As you may have noticed, I enjoy taking pictures of the local street art. Something else I’ve picked up from Mom. Funny how that happens. But it seems between each blog post, I find a significant amount that I can’t help but share. Enjoy. 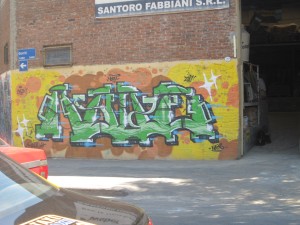 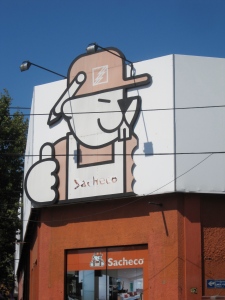 Not graffiti, but this is the mascot for the equivalent of Home Depot.

I don't know what to think about this one. - Palermo 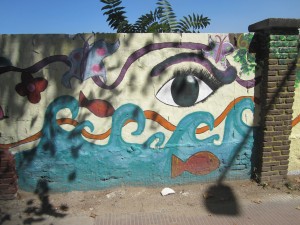 Close to our bus stop - Palermo 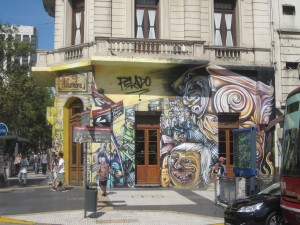 The outside of a restaurant - El Microcentro